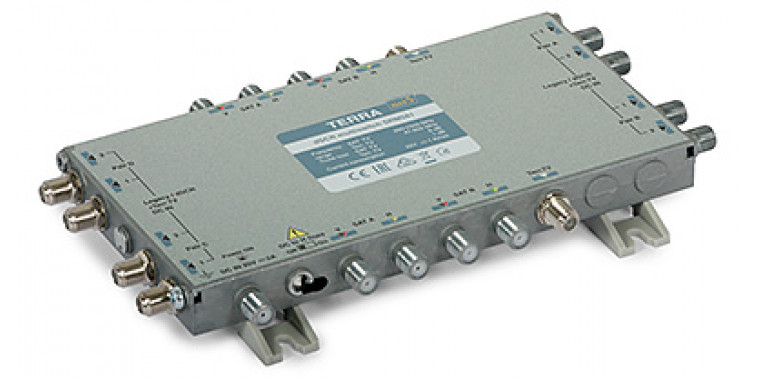 The programmable SRM-581 multiswitch has four pairs of Legacy /dSCR +Terr. TV outputs. The SAT IF outputs allow in dSCR mode for independent operation of up to 32 SAT dSCR receivers/STBs, fed in via two coaxial cables (16+16, default configuration) or via one coaxial cable (32 from dSCR1 output, after reprogramming with the PC102W R80561 programmer). In Legacy mode, each of the outputs can be used as typical SAT output (like in Universal LNBs or standard (legacy) multiswitches) for connecting a legacy SAT TV receiver).

Compatibility with quatro LNBs (after reprogramming with PC102W R80561 programmer)

SRM-581 single-cable cascadable multiswitch allows for distribution of DVB-S/S2 signals from two satellites and of terrestrial signals (DVB-T, DAB+/FM radio). The satellite signals can be distributed by means of dSCR technology (digital Satellite Cable Router), requiring only one coaxial line and satellite splitters to provide the signals to compatible SAT receivers, along with terrestrial signals that can be received by standard televisions and radios. The SRM-581 R80581 multiswitch fully supports receivers operating in two dynamic modes: SCR (Unicable I - 8 User Bands) and dSCR (Unicable II - 32 User Bands). The multiswitch has 5 inputs. Two pairs of SAT IF inputs (V1, H1, V2, H2, 290...2340 MHz) should be connected to two Wide Band LNBs A98222, the fifth input (of active terrestrial path) is intended for DVB-T, DAB(+) and FM radio signals. In dSCR mode, each of the eight Legacy / dSCR +Terr.TV outputs allows for independent operation of up to 16 SAT dSCR receivers/STBs (EN50607) fed via one coaxial cable, or, in the Legacy mode, can be connected to a legacy SAT TV receiver, in exactly the same way as an output of a Universal LNB or of a standard (legacy) multiswitch.

By default, all the outputs of the SRM-581 multiswitch are configured in Legacy mode (the legacy receiver provides 14/18 V supply voltage and 0/22khz tone control signals). They switch into Unicable mode after receiving DiSEqC command from a receiver/STB compliant with EN50494 or EN50607 standard. It means that each of the eight outputs of the multiswitch can independently feed up to 16 receivers (in the EN50607 standard). The digital signals should be split among the receivers with the use of satellite splitters operating in 5-2400 MHz band.

SMATV systems based on SRM-581 multiswitches should be fed from Wideband or QUATRO. LNBs (the use of the latter will require re-programming of the multiswitch).